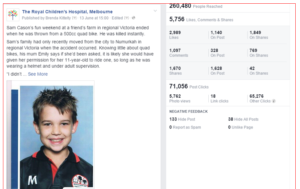 The Royal Children’s Hospital (RCH) does an amazing job assisting sick kids but its staff are frequently frustrated when faced with injuries that could have been prevented. Assisting the RCH’s Safety Centre to utilise the hospital’s vibrant Facebook community to share safety messages was a very satisfying project.

Solution: Sam Carson’s family was devastated when he was killed when riding a quad bike on a friend’s property, without their knowledge. His mother Emily, was willing to share her story to help spread the message of the danger quad bikes pose, particularly for children.

Result: The RCH Facebook post reached 260,480 people with an additional 553,336 accessing it on Victoria Police’s Facebook page. The post also prompted WinNews and ABC Regional Radio to run stories on the dangers of quad bikes, ensuring the safety message reached far beyond the audience for the original post.